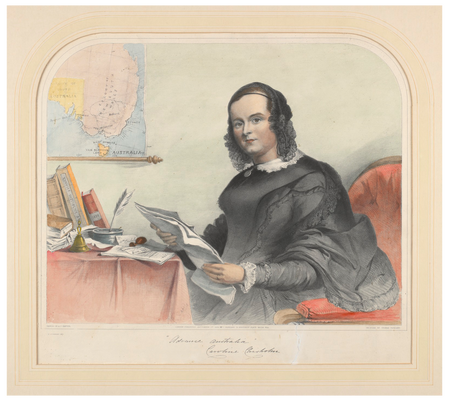 Image from the State Library of Victoria
Caroline Chisholm features in book 1 of 'Carly Mills, Pioneer Girl': A New World. ​She was known as the ‘Emigrant’s friend’ because she helped to improve the lives of so many emigrants to Australia in the early days of European settlement.
​
Caroline was born in England in 1808, the youngest daughter of William and Sarah Jones. Caroline’s father had married her mother after his first three wives had died. Caroline was William's sixteenth (and youngest) child. Her mother had seven children. They were a wealthy family, but from a very young age, Caroline wanted to help people who were less fortunate. As a young woman she married Captain Archibald Chisholm and went with him India, where their first two sons were born. Caroline spent the time organising education for the officers’ children. When her husband fell ill, they moved to Australia for the sake of his health.

Australia was in the middle of a boom in immigration. People were having a very hard time in the UK and migrating to Australia in the hope of a better life. But often when they arrived, they had trouble finding jobs. Many newcomers found themselves on the street or being abused by dishonest employers. Young women were especially at risk. Caroline knew that farmers out in rural areas were desperate for workers, so she set up a scheme to match new immigrants with honest employers in the bush. She established a home for female immigrants in Sydney, trained them for work, and took them to their new homes. With the help of powerful friends in England, she also worked hard to make the long voyage to Australia safer, and helped to reunite freed convicts with their families.
​
Caroline was not interested in making money – she only cared about helping people. When her health failed, she eventually returned to England and died in poverty. She is now known as ‘The Emigrant’s Friend’.

To learn more about Caroline Chisholm, follow these links:

A quote from Caroline Chisholm

‘I never can imagine that Almighty God sent females into the world to be cooks and housemaids all their days’ (Northampton Mercury, 5 March 1853).