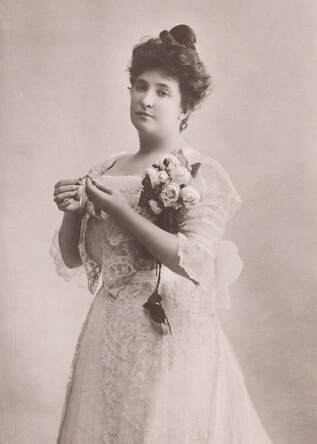 Born Helen Porter Mitchell in Melbourne on 19 May 1861, Nellie went on to become one of the world’s most famous opera singers.

She was a lively and mischievous child who showed a great talent for singing from a very young age. Sadly, her mother died when Nellie was only twenty. A little while later, Nellie moved with her father to Mackay, where she met Charlie Armstrong. They married and had a son – George – but Nellie and Charlie were unhappy together. Her husband did not want her to have a life on the stage. Neither did Nellie’s father, David Mitchell; like many people of his time, he thought it was not a respectable career for a woman.

But Nellie refused to give up. She persuaded her father to take her to Europe in 1886, where she had singing lessons with Mathilde Marchesi, one of the best teachers in the world. By the time she came back to Australia for a tour in 1902, she was a world-famous superstar who had performed for royalty and was mobbed by fans wherever she went.

Nellie’s personal life was troubled; her husband divorced her and separated her from her son for many years, which caused her great sorrow. But she was loved and admired by many fans and friends, who knew her as a strong, lively, generous woman. By becoming such a big international success, Nellie showed the whole world that Australians were just as capable of making real art as anyone. And by showing the world that there was nothing wrong with a woman having a career on the stage, she made it easier for other women to do the same. She also helped to promote the musical careers of others by helping them to get work and by teaching singing at a conservatorium in Melbourne.
​
Nellie retired from the stage in 1930 and came back to Australia. She died in hospital in Sydney the next year, at the age of 69.

To learn more about Nellie Melba, follow these links:

A quote from Dame Nellie Melba

'Art is not national. It is international. Music is not written in red, white and blue.
​It is written in the heart’s blood of the composer.’