Florence Nightingale: 'the lady with the lamp' 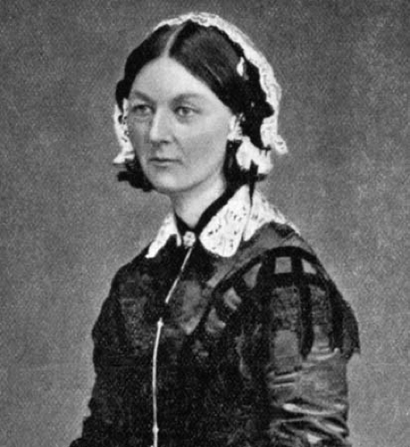 ​Florence Nightingale is the hero of book 4 of ‘Carly Mills, Pioneer Girl’, The lady with the lamp. She is best known as ‘The mother of modern nursing’.

Florence was born in Italy on 12 May 1820. She came from a wealthy English family; her parents were William and Fanny Nightingale, and she had an older sister, Frances Parthenope.

In her day, many girls didn’t go to school, but Florence’s father William gave his daughters a good education at home. Florence was a bright girl who loved learning and was fascinated by maths – but a career in mathematics was out of the question for a woman in those days. In fact, her family did not expect her to have a career of any sort. A woman with her background was expected to marry, have children and maintain a home with servants and a busy social life.  But that wasn’t enough for Florence. All her life, she had wanted to help people. She felt bad that her family had so much money while other people starved, and believed that God wanted her to help the poor and the sick. Her family thought that nursing wasn’t a respectable career for a young lady, and tried to stop her – but Florence wouldn’t be stopped.

Florence’s first job was in the Institute for Sick Gentlewomen in London, where she quickly became superintendent. The Crimean War (between Britain, France and Turkey on one side, and Russia on the other) broke out in 1853. Soon reports came out in the Times newspaper about terrible conditions and deaths of soldiers in the army hospitals. The British Government sent Florence and thirty-eight nurses to fix the problem. They went to the hospital at Scutari, near the city of Constantinople – now known as Istanbul in modern-day Turkey. They found the hospitals filthy and riddled with disease, and did their best to clean them up. The soldiers loved Florence Nightingale. Carrying a lamp, she used to roam the corridors at night to check up on the patients. One of them later wrote a poem in which he called her ‘The lady with the lamp’. The nickname stuck.

Queen Victoria publicly praised Florence for her work during the Crimean War, and she became very famous, but she actually did her best work in England after the war. After returning to England, Florence investigated why so many British soldiers had died from diseases. With the help of a doctor and mathematician called Dr William Farr, she studied the patterns of illness and found that poor hygiene in the hospitals had caused most of the deaths. Her own hospital had been the worst of them all. Florence was horrified, but she put her new knowledge to good use. She spent the rest of her life writing reports and books to spread the word about the importance of fresh air, good drainage, sewerage and waste removal. She persuaded the government to make changes that saved countless lives. Florence’s reforms allowed people to live longer, healthier lives.

Florence became sick when she was in the Crimea, and she never fully recovered. Sometimes she worked from her bed because she was too ill to get up. She died in London on 13 August 1910, at the age of ninety. Florence was a remarkable woman. She was kind and practical, brave and clever. Most importantly, Florence was able to admit her mistakes and learn from them. And she cared enough about people to try and make the world a better place.

‘I attribute my success to this: I never gave or took an excuse.’
*
‘Live life when you have it. Life is a splendid gift – there is nothing small about it.’
​*
'How very little can be done under the spirit of fear.'